A Bourbon Coriander Honey Cocktail is a bright, refreshing way to beat the heat using a blend of bourbon, lemon, and spiced chai tea. This bourbon cocktail is sweetened with Brine’s Fine Honeys’ Coriander Honey, which adds a complex, herbal flavor that perfectly complements the lemony tea, along with a sprig of mint. Best yet, this bourbon cocktail is simple to make and comes together in 20 minutes or less. 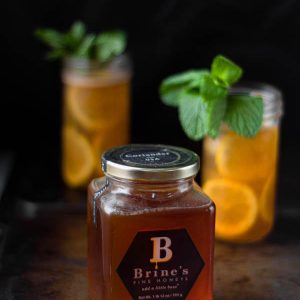 Bourbon cocktails can tend to be strong, which is why pairing bourbon with a flavorful tea makes good sense. Chai tea is earthy, robust, and often contains spice extras as well, such as cinnamon, ginger, cardamom, and clove. These layers of flavor add warmth and depth to any cocktail. By adding honey to the base tea of this <Brine’s Coriander Honey, Cocktail while the tea is still steeping, it infuses its own flavor profile into the tea before the bourbon even comes into the picture. To make sure the tea doesn’t overpower, a sprig of fresh mint is placed in the tea so it too can become part of the cocktail and add a little herbaceousness to the mix. In order to produce a properly mixed cocktail, a cocktail shaker is a good item to have on hand. It allows the elements to truly fuse over ice, plus adding a shaken cocktail to fresh ice just seals in the flavors so much more completely. If a cocktail shaker is not in the house, a good substitute is a mason jar. Just add the ingredients over ice as would be done in a cocktail shaker, close the lid, and shake away. The end result is virtually the same and that handy mason jar even makes for a good cocktail glass, especially where bourbon is concerned.

The ultimate sweetening agent for this bourbon tea cocktail is Brine’s Coriander Honey, which marries with the spiced notes of the chai tea deliciously. Coriander honey is one of the more complex honey flavors. Brine’s Coriander Honey has an herbaceous undertone with notes of cardamom, ginger, lemon, and black licorice, all of which work wonderfully with the spiced chai tea, lemon and mint. Coriander honey is well suited for citrus teas.  All the elements really come together in this Bourbon Coriander Honey Cocktail, which manages to be sweet, earthy, spicy, citrusy, and bourbon-y all at the same time. It is important to add the Brine’s Coriander Honey to the tea while it is brewing, because the flavor may not meld as well into the cold cocktail ingredients when mixing over ice. Note: The cocktails pictured have been doubled to fill tall glasses. Make four servings instead of two if two tall cocktails are preferred.

No comments to show.